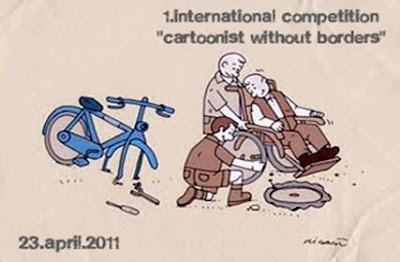 The Cartoonists are free to participate with already published works as long as these works have not previously been awarded in any other contest.

The dimensions of works should not exceed 30x40 cm.

Cartoons can be send via email but the original cartoon works should be send until 15 April 2011 via post.

Participants should write their name, surname, address, phone number and country of origin on the back of their cartoon work.

Short CV of the participants should be attached.

The works must reach the organizing association until 15 April 2011.

The participating cartoons will be put into an album. The cartoons for the album and the exhibition will be selected by a jury.
Competition album will send to cartoonists whose works are exhibited and published in the album.